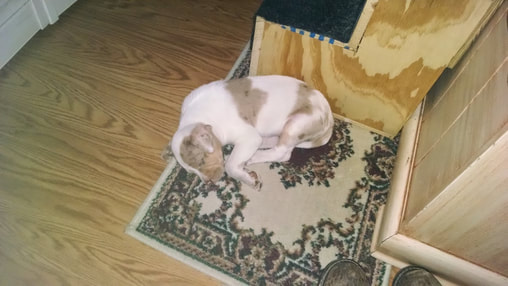 A cold, December day was when we first met the very young pup named Heather.  Her foster mom named her Heather after the little red-haired girl from the Charlie Brown cartoon.  Heather was surrendered to the Humane Society in Waco, probably because her eyes were malformed.  It is hard for backyard breeders to sell a deformed puppy.

The Humane Society put out the call to rescues to come save her as it would also be difficult to find the right home for her and at her young age, they didn’t have the resources to take care of her properly at the shelter.

​Akita Rescue of Northwestern Pennsylvania came to rescue Heather.  While it is an Akita rescue, they also have a soft spot for special needs dogs.  They even had an adopter ready for her in New Jersey.  Her new foster mom picked her up from the shelter and named her Heather.  The foster would hold her until she was ready for transport to New Jersey.
​ 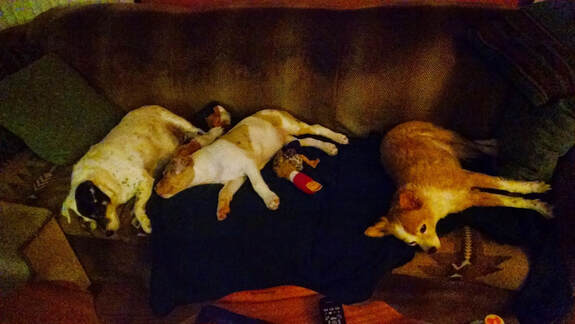 In the meantime, the foster had already had a weekend vacation planned out of town.  This is where we come into the story.  We were called upon to babysit Heather for the weekend, as she could not be left in a crate for the entire weekend.  Heather loved to play outside in the yard.  She also loved our two dogs, a Chihuahua mix named Emmy and a Jack Russell Terrier named Hayley.  At only 6 pounds, Heather was smaller than both of them.

​When we returned Heather to her foster, we learned more about her new adopter.  She was a single woman that had 2 jobs.  Heather would most likely be raised in a crate for 20+ hours a day.  We decided that we couldn’t let that happen to this poor little baby and at just 8 weeks old, Heather came to live with us permanently, right before Christmas 2014. 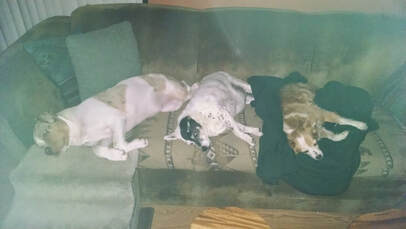 We were told she would probably grow to be in the 50-pound neighborhood, and as a small-dog person, this concerned me.  She grew and grew.  At times, I thought I could actually watch her growing as she slept.  I remember walking the two smaller dogs one day and turn back toward my house to see someone walking a LARGE dog our way.  I was trying to figure out what to do and how I was going to get by this big dog without incident when I realized that it was my husband walking Heather to join us.  Now at just over 100 pounds, she is the biggest and sweetest dog I have ever had.  Heather is the reason I am now a big-dog person. 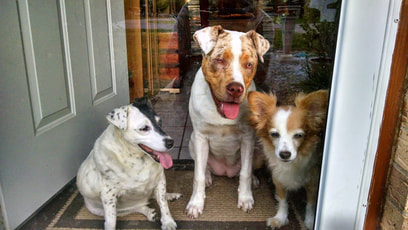 At 2 years old, we discovered that Heather had severe hip dysplasia.  One hip was worse than the other, and if we did nothing, she would lose her ability to walk.  The veterinary surgeon gave us two options: full hip replacement where we would have to go to Texas A&M or FHO surgery which is cutting off the top of the bone and allowing scar tissue to form an artificial joint to prevent the pain of bone-on-bone movement.  FHO surgery was considerably less expensive than total hip replacement and could be done here by our own vet.  We decided on FHO surgery for her right hip first, then we would look at doing the other one.  I did all her rehab at home, and the FHO surgery was a complete success!  She runs and plays just like she did as a puppy.  We still haven’t gotten the other hip done as it doesn’t seem to bother her much. 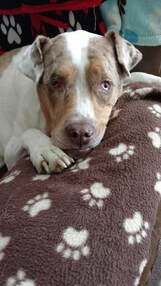 Heather is what my vet referred to as a “genetic mess”.  Her hip dysplasia is hereditary as are a few of her other traits, like her blue eyes.   I already mentioned that her eyes didn’t develop very well.  One eye is basically non-existent.  She started seeing an eye specialist in Arlington to find out that her “bad” eye was not the one we should be concerned with.  Her “good” eye was showing signs of cataracts.  Then, at the age of 5, the unthinkable happened.  Heather went completely blind.  We got her up to the eye specialist as soon as we could to find out that she has a genetic condition that caused her immune system to try to eat the blue from her eyes.  The good news is that with special eye drops and medication, her sight has returned.  She is currently and will always be on eye drops to slow the progression of the disease.  Her “bad” eye was removed in January 2021 as it was causing her some irritation.
Today, Heather is a happy and well-adjusted dog. She snuggles in the bed with us at night and in the mornings after her breakfast.  She still loves to play and to go for walks.  Sometimes she even helps me teach classes.  It’s amazing how a little deformed puppy could bring such love to our family.